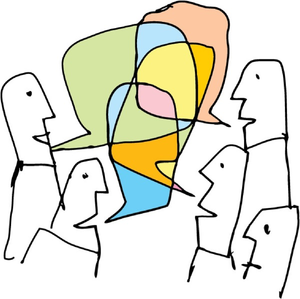 The Most Important Debate Questions You’ll Ever Read About

Hey DSST MTV! My name’s Seline and recently, I had an argument with my siblings about whether cereal is a soup or not. Silly, I know. (Don’t tell them this, but cereal is obviously a soup. I mean, there’s no question about it.)

From this argument, I had the marvelous idea to ask DSST MTV about debatable questions like these, because I know a lot of us here sure do feel strongly about our opinions. I made a survey with some silly, debatable questions, spread it around, and I’m now here to present you with those results! Buckle up, because this is about to be quite the ride. : )

Ladies and gentlemen, boys and girls, human and non-human, the most iconic question of our time has finally been answered. DSST MTV has spoken, and they’ve ruled that yes, water is indeed wet. You know, as strong as the opinions of the people at DSST MTV are, I can think of a group of people who’d have even stronger opinions about this question, if that was even possible- scientists. They’d furiously be pulling out their flasks and periodic tables and whatnot as they argued, and honestly, I’d pay good money to see that.

2) Do straws have two holes or one?

This is more of a tricky one, it really just depends on how you see it. I mean, is a straw just a really long hole or two small holes with plastic in between? Well, DSST MTV has made up its mind, and they’ve ruled that straws have just one long hole. Personally, I view straws as a giant slide for mini-me to spend all their time sliding down, but that’s just me. Hey, the good news is I now have a straw to drink the water from Question 1 with. Straw + Water = The Perfect Duo.

Well, is it? I mean, who knew a piece of meat wedged in between a piece of bread would be such a hot topic. Well, DSST MTV has an answer, and they’ve ruled that nope, hot dogs aren’t sandwiches. I actually have a question for those voters- if hot dogs aren’t sandwiches, then what are they? Are they their own breed of food? (Or are they their own bread of food… get it… because hot dogs have bread… I’ll leave now.) I need these answers, folks.

Toilet paper, oh, toilet paper, you always manage to make an appearance in the least expected places- even in my own survey. This time, you managed to cause yet another debate- great job, you never disappoint. Well, DSST MTV has spoken on this vital issue, and they’ve ruled that toilet paper should be going over the toilet paper holder, not under. If you need me, I’ll be traveling the world to correct all the toilet paper rolls that are under its holder instead of over. I’m doing the good work of the world.

5) Should you wet your toothbrush before or after putting toothpaste on it?

We got yet another bathroom-related question here, folks, but this time, it’s about toothbrushes. The variety is truly endless, isn’t it? The question at hand is whether or not water should bless a toothbrush with its presence before toothpaste does, and the people of DSST MTV have spoken. They’ve ruled that yup, that toothbrush better have some water on it before toothpaste touches it! You know what, forget about what I said about Straw + Water being the perfect combination- Toothbrush + Water are clearly the real deal.

6) Does pineapple belong on pizza?

This is the age-old question that we’ve all been waiting for an answer for, and we’ve finally got one! In an extremely close call (1 vote made all the difference), DSST MTV just barely ruled that nope, pineapple has no place on the glory that pizza is. Sorry pineapple, I guess you’ve been fired. You can go chill with all the other potential pizza toppings that’ve been fired- I’m looking at you, anchovies.

7) Was the dress white and gold or blue and black?

Well, this is an even closer call than the last question, believe it or not. 60 votes were evenly divided between both sides of this question and now we’ve got a good old-fashioned tie on our hands. DSST MTV really can’t make up its mind, I guess! You know what this means- we’re gonna need someone to be a tiebreaker in the comments below, or else we’ll have to find another way to set the vote straight. Trust me, I have lots of ways to set the vote straight.

Can fire be… on fire? Well, DSST MTV has ruled that no, it can’t. I mean, I guess that something so smoking hot has no business next to something that’ll literally set its heart on fire. (I really need to stop with the puns… the thing is, they’re just too good not to share, one could even say they’re fire… yup, I’ll be in the corner of shame if you need me.) Fire, go talk to Water from Question 1. I have a feeling you guys would be great friends.

9) How do you pronounce GIF?

It’s the infamous question, the one that the very fate of humanity rests on. How in the world do you even pronounce such a word? I mean, even looking at its many syllables and complex combination of letters gives me a massive headache. Luckily, it didn’t for these voters, and DSST MTV has ruled that GIF is pronounced like the first 3 letters of the word gift. Ohhh, should I make a GIF of this moment? I mean, it is about GIF’s… it’s tempting… I’ll think about it…

10) Since tomatoes are technically fruits, does that make ketchup jam?

I’ll be honest, ketchup is the last thing I saw I’d see in this quiz, but hey, I just couldn’t resist asking this weirdly intriguing question. So, have I been eating burgers with jam or sauce all along? I mean, the fact that tomatoes are fruits kinda complicated things, don’t you think? Well, the people of DSST MTV have spoken, and in a close call, they’ve ruled that nope, ketchup isn’t a jam. Sorry ketchup, but your place is with the sauces, not the jams. I don’t make the rules.

What’d you think of these questions? Let us know in the comments below! Feel free to start some of your own debates down there and hey, maybe even be a tiebreaker for Question #7. Thanks for reading! : )

Thank you for your donation!